As your character levels up and progresses, your character gains stat and proficiency points to allocate. Players gain 5 stat and proficiency points every time they level up until they reach level 51. From that point onward, players will get 1 stat point and 2 proficiency points. Stats max out at 100 while proficiency max out at 120, but most stats can be augmented to 124 with the use of Master-crafted [MC] and God-crafted [GC] items. For more information on stats and levels, visit this page. On October 18, 2009, Dead Frontier gained a brand new avatar system, which included new character customization such as hair, skin color, facial features, and clothes. All existing Dead Frontier players will get the chance to remake their survivor when they log in.

Your Character is your own survivor that you can customize. When you begin the game, you can customize your Character's Name, Profession, Gender and details such as skin tone, facial appearance, hair type and color, and for male characters, beard type. The looks of a Character isn't that important, but its Profession is. Most Professions are quite different from one another and have their pros and cons. For example, only Chefs can cook food, but they lack any sort of Stat or Proficiency boosts. 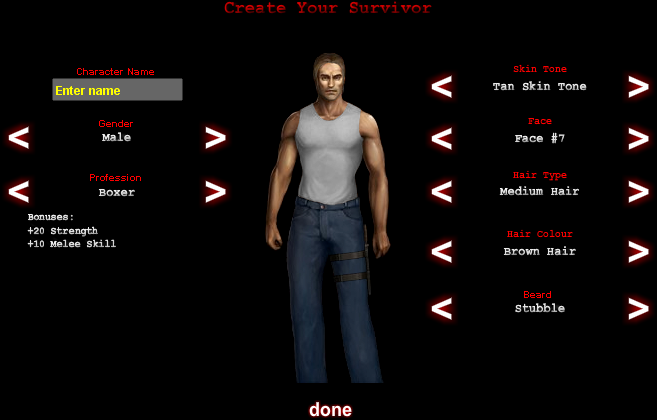 Here you can find a gif that will briefly cover your options when creating a new character. This includes Skin Tone, Face, Hair Type, Hair Color, Beard Type (male only), and Beard Color (male only).