When you are playing Dead Frontier, you are either in one of the major outposts, the Inner City (where the live action occurs), or inside of a Personal Outpost (PO) in the Inner City.

Each outpost contains useful locations including:

Here is the list of the outposts available in the public 3D Version: 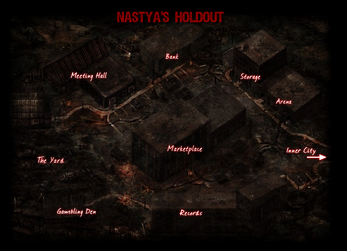 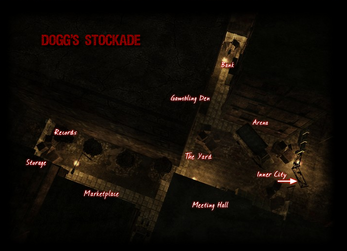 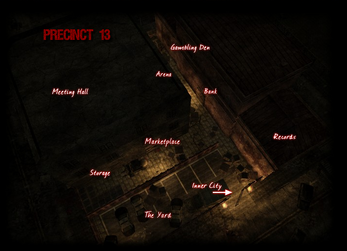 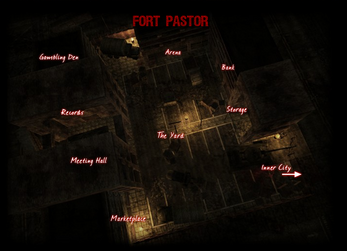 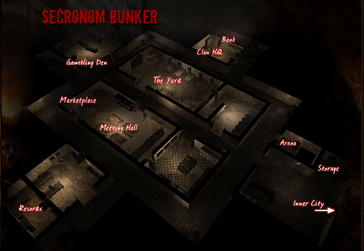 The human lust for violence never changes. Even with the collapse of civilization and the human race on the brink of extinction, there are some with a penchant for murder that cannot be satisfied by the undead. Thus, our leader created a place to contain these sadistic elements of post-apocalyptic society, which offers rewards that may even tempt more ethical survivors, as well as dedicated doctors for the losers.

Accessible from every major outpost is a dedicated PvP arena where you can fight other players without needing to worry about maintenance costs for your character. When you die or leave the arena, your health and armor are restored back to their previous conditions from before you entered the Arena. You also do not lose cash or experience when you die, and death in the Arena does not invalidate your Top Player Killer score. The amount of PvP Points awarded for each kill depend on the killer's level in proportion to the victim's level.

The intention is to allow players to PvP for fun.

The Arena is also tiered into 3 separate level groups: there is an arena for levels 1-15, 16-30, and finally, 31-325. Arena maps rotate between previously-determined areas or layouts.

Note: As of November 27, 2018, PvP in the Inner City no longer yields PvP points, making the Arena the exclusive source for PvP points.

What was once a warehouse for holding large machinery and service trucks, is now the most valued storage building in the area. Under constant and heavy guard, the Bank holds the hopes and dreams of every survivor as they struggle to survive in this post-apocalyptic economy.

The Bank allows players to safely store their cash but does not offer interest. Cash stored in the Bank will not be lost when you are killed in the Inner City (and all survivors inevitably WILL be killed, eventually). There is no penalty for excessive deposits or withdrawals. It is highly recommended that you deposit ALL cash before going into the Inner City. When you travel from one outpost to another, your bank balance will be automatically transferred to your new location.

Humans have always been highly competitive with one another. Not even a zombie apocalypse can put a damper on our competing spirit. So naturally, the local office's award wall was replaced with lists of survivors who have performed great feats or accomplished great tasks. And every week, our righteous leader rewards the worthy with access to his Storage of Supremacy where weapons and armor of Legend are rumored to reside.

In the record hall, players can see the current leaderboards for certain ongoing competitions between players. Winners of the weekly competitions for "Top Survivor" or "Top Player Killer" receive a one-week invitation to use the X-Dusk Shop.

What is it that gives the survivors the strength and will to push on in their bleak situation? The answer is "community". It is our greatest asset against the shambling undead. We can organize, plan, and interact intelligently. Therefore a general forum was made out of the Holdout's enormous on-site cafeteria. Several bulletin boards are also scattered about the premises, and merchants are often seen selling their wares as you walk inside the building. This is one of the most active areas in the holdout, as it reminds survivors of what it was like to communicate and socialize before the outbreak.

It is recommended that players with queries and concerns ask questions in the "Questions & Assistance" section.

Posting in Questions & Assistance does not necessarily make the poster a newbie, so players should not feel ashamed to post their questions there.

Reinforced and rebuilt, the market was born through the collection of nearby office buildings and several small factory buildings. People are seen inside and outside of these buildings, selling things from food and medicine to assault rifles and grenade launchers. Due to no-longer existent weapon laws, players can sell nearly anything inside this gigantic complex, for nearly any price. Because there are no limits for what can be sold (the only exception being Dusk and outpost-owned equipment or resources) many aspiring entrepreneurs and profiteers are able to flourish in this new bazaar of sorts.

To buy, select "Buying". Press the arrows to choose a broad category of goods or type in the search bar to search for the particular item you want.

To sell, select "Selling". Drag your item from your Inventory to the "Selling" box and a pop-up window will appear, which you can enter a price into (or leave at the default value of $100). Be sure to double-check the price of the item on the Marketplace first, before you sell the item, or else you may sell the item lower or higher than the current market price (and lose potential money or the buyer may decline your offer, respectively).

In order to trade privately, you must first be in the same outpost of the player(s) that you want to trade with. To begin the transaction, go to the player's profile and select the "Trade" option. You will then be directed to a private trading menu between you and that player, where you can view Incoming and Outgoing Offers from that player. Drag the item to the "Outgoing Offers" box and select a price in the pop-up window.

Note: The "Private" section of the Marketplace only allows you to view your Incoming/Outgoing Offers and will not allow you to initiate additional private transactions.

Trading is done at your own risk. If you are scammed or have an item otherwise stolen from you by another player, however, you can report the offence to a Global Moderator and, in most cases, that player will be banned. In order to protect players, the Dead Frontier community offers the services of approved "Middlemen" that act as intermediaries during transactions - the list of those players is provided, here.

A once-abandoned hall due to be demolished for health and safety reasons is now the center of employment for this haven's new working-class. Survivors come here to find jobs and tasks that can earn them some funds to survive, as well as give them precious experience killing the infected and looting for specific items inside the Inner City.

The Gambling Den is a simple, small hut outside of the Meeting Hall which previously served as the gardener's storage shack and is now the center of luck and pleasure...or failure and loss.

The new home to the old gardener who maintained the factory's huge yard (which now forms the majority of Nastya's Holdout). The old man is apparently a passionate card player, always available for a good game.

The main objective is to find the Queen among the two Jacks after the three cards are shuffled with their faces down.

If you are lucky, you may just guess correctly and receive a cash reward, which is double the cash you bet on the round. If it is not your lucky day, well then, just remember..."Never bet more than you can afford to lose".

Because of the amount of free space currently available in the outposts, both new and old arrivals are allotted a select amount of space to store their objects. Initially, each survivor is given 5 storage slots, which can hold 5 items (Clothing, weapons, food, etc). However, outposts have finite storage; in order to obtain more room for your stuff, you must purchase more slots, which currently can only be bought in 5-slot bundles. The price starts at $25,000, and increases in 25k increments, always for 5 more slots. In order to keep room for Fairview's ever growing population, a single survivor can only have up to 400 slots for their spare inventory.

This is where you go to change the color of your Attire & armor, and master craft (MC) your Weapons & armor. Survivors have claimed to get extremely lucky and get God Craft (GC) stats using this method, however by paying 250 credits for weapons or 500 credits for armor, they can be simply God Crafted. You can also rename your equipment for 500 credits and scrap any item for their specially set value ( for MC'ed items the scrap value is increased ) .

The Crafting menu allows you to craft various Weapons, Armors, Implants and Clothing articles using rare Crafting Materials that can be found in the Inner City, plus a large sum cash as crafting fee.

Fast Travel allows you to instantly move to any outpost, even if you haven't visited them yet. The fee for Fast Travel is approximately $5000 for each map square you would have traveled on foot.

The Inner City is where all the action takes place in Dead Frontier. The Inner City is where you venture out in the streets of Fairview to loot items and cash, and to fight the hordes of infected. It's a large area and it is important to remember that the farther you go out, the more likely it becomes to find better items and the more likely it is to be overwhelmed with the growing difficulty of infected.

Several buildings, establishments, and points of interest can be found scattered around the city. The buildings can be utilized by players to hold up and make their own personal outposts by the means of barricading .

AdminPwn has been known to randomize the IC map from time to time, so all locations may not be up-to-date.