Clan HQs were added June 11th, 2014 after being one of the most support ideas to be added to the game for years. With this implementation, Clans would be able to compete against each other in weekly competitions, and often marks your clan as being officially established. Clan HQs can be found on the Outpost screen, and be purchased for 10 million dollars. Each HQ holds up to 20 people maximum, and cannot be expanded upon.

It's important to note that if you leave a clan HQ within the first 30 days of joining it, you will not be able to rejoin that clan until that time period is over. You can still join a different clan in that time period, however. 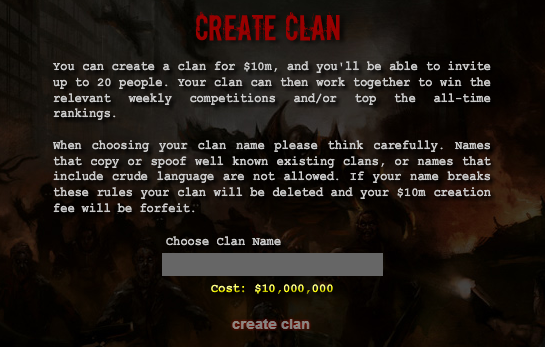 Once you purchase a Clan HQ, you can customize your clan's profile. This screen is also shown if you click on someone else clan. Here you can find the clan name, the clan description, the clans boosts, the clans records, and finally a list of clan members and their ranks.

From this screen, you can also edit your clan, leave the clan, and also send clan messages. These messages work like normal PMs but include all members of your clan. 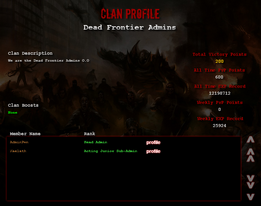 The clan description is a text box that allows users to describe their clan and their clan's interests. This could also include requirements to join, achievements the clan or clan members have gained, or links to clan threads and offsite. It is suggested to include mainly a brief description of your clan, and possibly a link to your clan thread.

The only restriction of the Clan Description is that is has 800 character limit, however, only have of that limit displays correctly so use the space wisely.

If a member leaves the Clan HQ, all the records that they added towards the clan permanently removed as well. This helps prevent clans from swapping out members at the end of the week if they win CTS or CTPK. If they rejoin the records will not be affected.

All of these are open to the public to view, and update a few times a day.

Clan titles can be found and edited on the same page as the clan's description. Clans are limited to having 6 titles or ranks. The name of each title or rank can be changed to fit the clans theme.

The Owner Title or rank is only open to the player that purchased the Clan HQ or was given ownership. This title position is limited to one person and gives them complete control over the clan.

The Leader Title or rank is open to as many players as the clan owner would like. This rank also comes with some powers.

The rest of the titles are 4th Rank Title, 3rd Rank Title, 2nd Rank Title, and Lowest Rank Title. These ranks do not provide players with any control over the clan and they are simply there for variety and more options.

Clan Boosts work very much like Implants but do not take up any space and benefit all players that are members of your Clan HQ. Those that have simply been invited and have yet to accept the invitation do not benefit. In order to receive clan boosts, you must exchange victory points for them. When purchasing them, under your clan name you can see how many unspent victory points your clan has.

What boosts are there? Below is an image of all boosts and their price. You can have up to 10 of each boost before it is capped and you can no longer purchase them.

Victory Points are awarded to clans that participate in the weekly Top Player Killer and Top Survivor scoreboards.