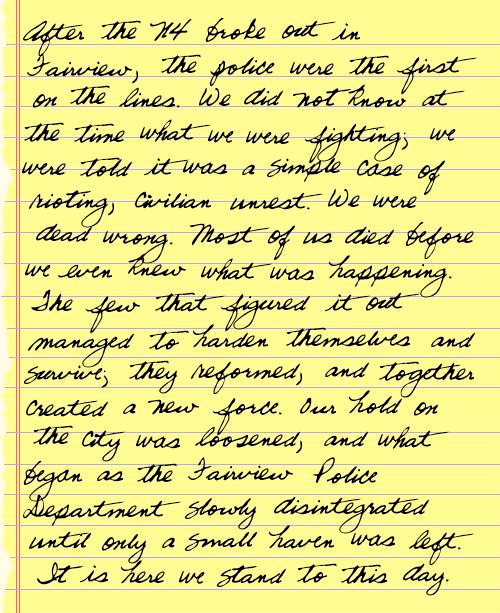 Dallbow Police - 'To serve and protect'

We are a Lawful Good clan -we seek to bring Law where there is chaos and good where there is evil. Our force is bound by duty to help the community and protect the weak from the undead around us. The Department is expected to act with honor, compassion, and restraint. We aid clans we deem are beneficial to society, and counter those who seek to destroy it through their malicious intentions. We don't offer hand outs, we offer assistance.

History of the Department

In May 2008, in the first months of Dead Frontier’s existence, two players formed a small clan, called the Maxville Police Department. The founding players were chocolah, and Sniper Wolf. Its initial stages were fortunately trouble free and the clan began to grow. chocolah, the police Chief at the time ventured out into the city during a survivor rescue operation before losing contact with the Headquarters several hours later. He was declared missing in action. As Second in Command, Sniper Wolf assumed leadership and moved the base of operations to Wolfton shortly after. The clan lived on as the Wolfton Police Department. After being assimilated into an elite military unit, Sniper Wolf left Fishcatch2.0 (one of the most distinguished officers) in command. Due to further development of Fairview’s layout, he relocated the Department to Dallbow, our current residence.

Failure to obey these rules may or may not result in your demotion/explusion from the force based upon the extent of the infraction.

1. Treat all members of DF with respect, including new players and fellow officers.

2. Don't bully other players. This includes not but is not limited to cheating/tricking new players, and attacking other players outside of PvP when it is implemented.

3. Respect the word and law of AdminPwn and his mod squad.

4. Do not flame other members of the forum.

We are looking for any members of the Dead Frontier playerbase who want to make a positive difference to the community.

Details regarding recruitment can be found on our Dead Frontier Thread below:

Retrieved from "https://deadfrontier.fandom.com/wiki/Dallbow_Police_Department?oldid=114828"
Community content is available under CC-BY-SA unless otherwise noted.