View source
Welcome, one and all, to the Dead Frontier Wiki!
The wiki about Dead Frontier that anyone can edit!
(remember to check out the Wiki Rules before editing)
Articles
Content

DF1: SCOURGE OF THE SCARECROW

Starting early on Saturday October 23rd and continuing until Sunday November 7th you will be able to:

The scavenger hunt runs from the 23rd until the 30th and begins at 6:00PM UTC each day in our Discord (https://discord.com/invite/deadfrontier2). The first person to solve the clue and find the Golden Pumpkin wins 1,000 credits and an engraved trophy. Note that even if you are unable to be online at this time you can still get the pumkin later in the day (until next reset). You will need to collect at least 5 Golden Pumpkins to craft the special reward. Any spare Golden Pumpkins can be used to craft smaller rewards. Be sure to check the df1-announcements channel for further details closer to the day. 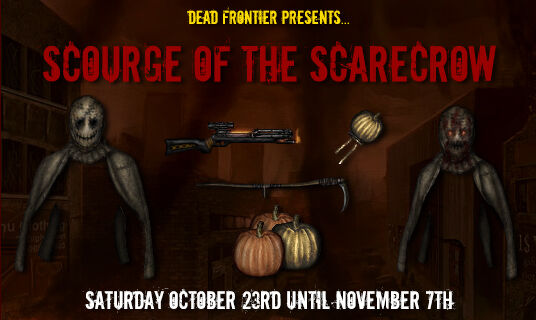 Starting from today, all services will have a minimum value of repair level * 20:

Inputting a lower price into the sales dialogue will automatically raise the price to that amount.

UPDATE 11/08: The price floor has been lowered to half it was previously, so a level 75 service will have a minimum price of $750

Check out the new Limited Edition Hailstorm C12. It comes with a unique 3-shot burst fire mechanic and can slow enemies by 50% per hit.

Only available until August 17th so grab one while you can! 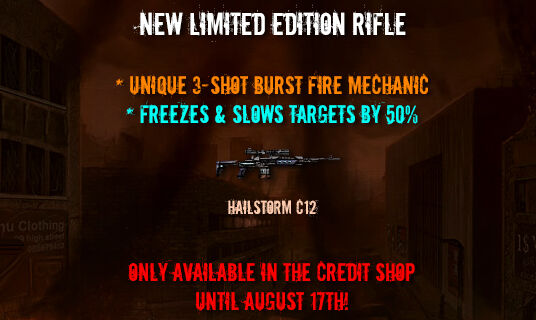 There's been some confusion around the way I worded my last post surrounding the Dawn weapons. No new Dawn (or Dusk / X-Dusk) weapons are going to get added. With that said, I am looking at balancing them out. I'm avoiding giving them a damage buff and aiming for a unique mechanic that makes them stand out.

Currently, I'm experimenting by giving them the ability to ignore PvE armour on infected (this includes shields) as well as some capacity increases. Armoured infected are more common in Death Row, so this should make Dawn weapons quite powerful and versatile in this end-game area without direct power scaling. For the Dawn Melee and Chainsaw weapons, the current idea is to lower their melee proficiency requirements to 0. This should enable a lot more players to be able to enjoy these weapons as even most end-game players do not have high enough melee proficiency to utilize them.

This is all subject to change during the testing period I mentioned in the previous post as I gather feedback. That said, some of these changes may go live before the update is out (stat-wise, not mechanic-wise). Due to the confusing wording, I just wanted to clarify what the plans around these weapons were.

Hey @everyone, I have a quick progress update regarding this upcoming Death Row SEZ revamp. I'm working hard to catch up and get this update out to you guys on July 19th.

Besides some environmental bits for Death Row, just about everything is complete. I will be doing a test period with a group of players to help find bugs and finalize stats on the new 120 weapons, Dawn weapons, Death Row infected / bosses, new variants of current bosses, and the SEZ loot pool that will start in a little over a week.

Thank you for your patience. 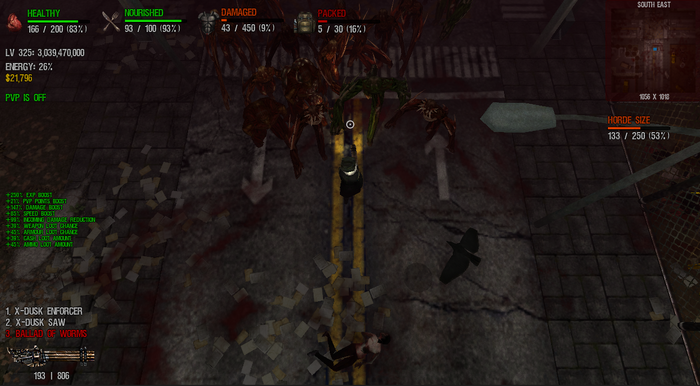 Alright, it's time to talk about what I have been working on. Things are still being developed but I will release more details later on and answer questions or address concerns as they pop up. Here is a basic overview.

Traditionally we would expand the map more to the right side, adding a lot of space. This time I want to put more focus on making better use of existing space. We have a large map but not a whole lot to do in it. This means revamping current areas (and infected) to feel unique and turning low traffic areas into points of interest.

The scope of this varies from idea to idea and area to area but starts with the largest being a South End Zone revamp. A hellscape created by experimented on infected locked away, now releasing into Fairview.

SEZ is supposed to be the go-to place for looting. While it does indeed have better drop rates, NEZ has an uncontended convenience factor. The aim is to create a looting-based equivalent of the Wastelands. So what are the goals for this area?

We're working on a new lootable weapon set that can only be obtained by looting this revamped SEZ. These new weapons will have crafting recipes with high requirements (existing 120s, devil hearts, etc), but more excitingly, we're adding in the chance to loot them already assembled and complete.

I am taking some inspiration from "Death Row" that existed in the DF2D era and adding a Secronom twist on it. One of the first things I am borrowing is some of the infected. We are introducing DF3D remix versions of the Crow (and its ability to fly over objects), Red Longarms, Green Longarms, and.. a few surprises. I'll show more of them later on. :)

There are currently some experimental area-specific features, twists in the works. This includes turning it into a "dark zone" where minimap visibility is obscured, needing to clear the area around you of infected before being able to open a menu manually, and hardcore aggro spikes where buffed variants of the areas infected spawn (similar to old hardcore events but during the aggro spike duration). I will keep you guys updated on my progress with this area revamp!

Finally, this next addition isn't directly related to the SEZ revamp but will be included in the update. I am adding more variations, like the current "flaming" variation, to existing bosses starting with some ideas inspired by DF2. At the moment this includes charred and irradiated but will be expanded to a few more. These will introduce slight mechanic and stat variations to mix things up a little. 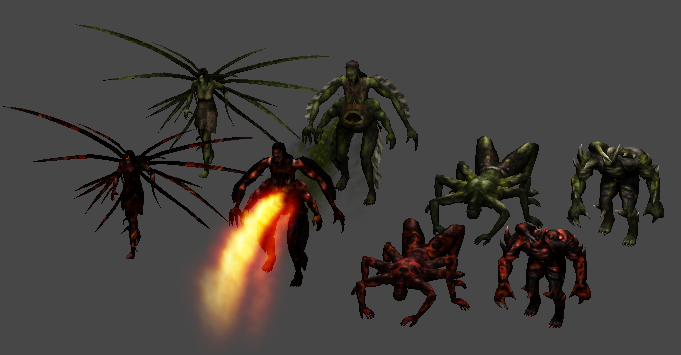 To celebrate 13 years of Dead Frontier, everyone gets the following bonuses until the end of the week:
+200% EXP, +100% Weapon/Armour Loot, +100% Cash/Ammo Loot and more loot spots!

There is also something special in the Credit Shop :)

(Due to popular demand, I've decided this event will be extended until the end of the week)

Beginning of a New Era?

Today was an unusual day in Fairview: from the northern reaches of Secronom Bunker down to the furthest of the Wasteland, the sky is covered in a thick, mysterious red fog that blotted out the sun and seemingly caused the infected to be more aggressive than usual.

After 9 days of chaos, the "Bunny Man" has finally decided to end the chase himself, by broadcasting his final coordinate across the entire city and inviting everyone for a talk. 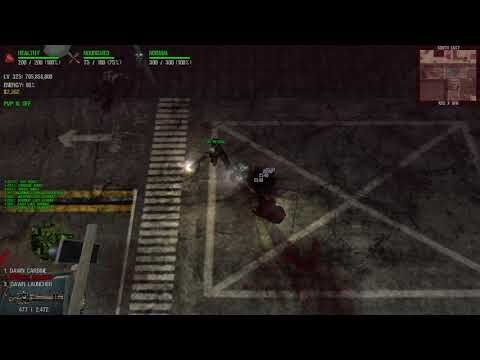 Following the coordinates, our scouts made contact with an individual who introduced himself as Dr. Peters, a member of the cult that wrecked havoc on the city this Easter, seemingly leading to the wild chase that left the Commander MIA and the Secronom crew scrambling to apprehend him. He warned us of a facility located somewhere in the city that the Commander and Dr. Adler tried their best to seal away (along with whatever unfortunate survivors trapped within), currently being barely secured by an emergency power system that's about to give way, and containing unimaginable things that threaten to send Fairview into what he can only describe as "the outbreak all over again."

Whatever he's talking about, it seems that this facility is the cause behind the red fog that is currently suffocating the city in darkness. Our best hope is for the fog to clear once the season changes, and our forces be as well armed as possible to whether what's ahead.

The transcripts for the Scavenger Hunt, as well as the new NPC's message, can now be found here.

Since activity in the arena is pretty low aside from Mondays, we've decided to add a mini daily TPK competition. It works just like the weekly competition, except that the winner each day receives 100 credits. The first competition starts right now!

Hopefully this should make the arena a teeny bit more lively

You can now craft either a speed boost or Epic Egg 2021 (which gives a guaranteed cosmetic) with your spare Silver Easter Eggs!

I'd like to extend my congratulations to our new (and returning) forum moderators. I hope you'll all give them a (not so hard) time as they adjust into their new roles.

Please report any bugs found in #df1-bug-report so we can have a smooth event.

Side note: Wanted to say thank you for being so patient in regards to news on updates outside of tomorrows event. I will be talking about what I have been working on and future plans after this event has concluded.

In addition to the Easter items found, we at the DF Wiki have unearth a brand new secret Easter item, hidden deep in the game's code. While the current sprite appears to be just a placeholder, here's a teaser for it: 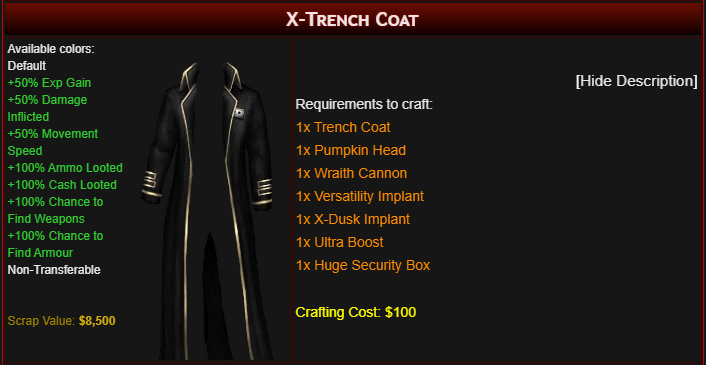 DF1: CALL OF THE CULT

Starting early on Friday April 2nd (Good Friday) and continuing until Sunday April 11th you will be able to:

The scavenger hunt begins at 12pm UTC each day in our Discord (https://discord.com/invite/deadfrontier2) and the first person to solve the clue, find the Silver Easter Egg and post proof wins 1000 credits. Note that even if you are unable to be online at this time you can still get the egg later in the day (until next reset). You will need to collect at least 8 Silver Easter Eggs to get your reward. 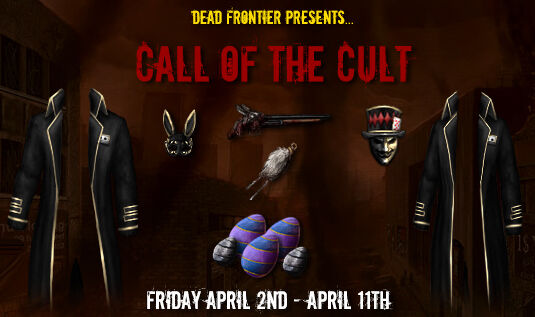 Hello everyone, as part of the forum cleanup and restructuring process we are going to be looking for some new forum moderators. Most of the information you will require is written on the application form.

The forum moderator applications will be open for approximately 1 month from today and we will be selecting 2-3 applicants based on their responses, community activity, and involvement. The role to put it simply will require you to moderate the existing forum boards and enforce the Dead Frontier rules as well as helping users with any questions they may have.

The staff selection process for Dead Frontier has always been tight so with these applications we hope to give everyone the ability to tell us about yourselves and have an opportunity for the role. We look forward to reading your responses and best of luck.

Check out this epic piece of DF fan artwork! It was created by Rally and his friend, and took over 160 hours to complete.

This is gonna be my new desktop wallpaper

I've begun work on things outside of this but we're not quite ready to talk about it yet and would like to wait until some of our discussions and ideas are more set in stone. Until then: https://youtu.be/dQw4w9WgXcQ

If you see this, your JavaScript might be disabled or DiscordIntegrator plugin isn't working. If the latter, please contact a wiki administrator.

Dead Frontier has over 12,000,000 registered accounts, and gains several hundred members every day!

The Dead Frontier Wiki is a wiki dedicated to cataloging the Dead Frontier universe, covering the game itself as well as providing community-produced canon stories, guides and other interesting information. Want to help out? Get an account, and start editing!

Please note that this wiki is fan made, so the provided information may not always be 100% correct and up-to-date. If you find that something is wrong or needs to get updated, please edit the page in question and add a short summary of what you changed.