I ran as quickly as my legs could carry me. Behind me were five of them, bloodied and mangled, but still sprinting at full speed. I was tired, out of ammo, and knew I wouldn't be able to keep my current pace much longer. Then a glimmer of light caught my eye. My salvation had come just in time and now laid just ahead; Dogg's Stockade, one of the few safe havens left in this god-forsaken city. A surge of adrenaline went through my body as I summoned all my strength to make the last stretch. As I drew closer, I saw no one at the walls even though there were campfires. As I reached within a few feet of the entrance, a voice shouted "Duck!" . As I slid across the floor, the guards appeared from hiding behind the walls and swiftly cut down my pursuers. One of them offered me a hand to pick myself up. "Welcome to Dogg's Stockade, make yourself at home."

Dogg's Stockade is located to the north of Nastya's Holdout in the Inner City, and is the closest outpost to The Holdout (bring food along though, it's quite a while from Nastya's). It appears to be a former correctional facility, due to the presence of prison windows on the buildings in the outpost screen. There are usually four melee guards out front. There are also several junkyards and depots nearby that are full of level 1-30 food, meds, weapons, and other lootable items.

Dogg's Stockade contains the exact same functions as Nastya's Holdout, including the change of your respawn to there upon death (after visiting). However this outpost is substantially more dangerous than Nastya's Hideout because it is in the yellow area . Missions here are quite farther than in Nastya's Holdout.

All the outpost guards here use melee weapons instead of firearms. They are the only guards who move like a real player, but only attack zombies near the outpost.

Dogg's Stockade is located at the Northwest zone of the map, and is the furthest north of any outpost. It is also the closest to Nastya's Holdout.

Dogg's Stockade is substantially more dangerous than Nastya's Holdout because it is in the yellow zone. The following zombies spawn here:

Dogg's Stockade has twelve missions. They are the same types as Nastya's Holdout, but more difficult .

Some of the missions might be considered hard to some Stockadians as they involve a powerful boss or multiple bosses, such as the Titan in Big Brother and multiple flaming zombies in Flamin' Stenches. However it is possible to kill a titan simply with a razor alone for experienced players. You can team up and kill the boss(es).

Only some missions are very hard, such as Bones and Sickle-Armed Bastards.

Outpost attacks at Dogg's Stockade are much more difficult than those at Nastya's Holdout. Bones, Reapers and Small Bloats, in particular, will make the attack difficult for anyone without experience with melee or rifles and pistols.

Also, it is wise to stay out of the "safety" of the outpost, as the guards wield only melee weapons, and the space inside the outpost is very small - even the weakest zombies can get through, and as you have very less space - you will almost certainly get hit.

A tactic for Nastyain-immigrants or weak Stockadians is to simply stay close to the outpost so the guards will weaken the zombies, and slow them down by getting in their way, which benefits you, although you will lose exp because the guard(s) hit the zombie(s).

Dogg's Stockade has slightly better loot than Nastya's Holdout, granting random chances to loot 1-30 level items. From guns to armours you can loot many things. It should be noted that there is a chance of finding any item from Nastya's. Just go two blocks to the right if you want to find useful items easily, since there will be 3 apartment buildings and a hospital, filled with loot spots. The most common ammunitions are:

The most common loots around Dogg's Stockade is:

A good loot route for Stockadians which earns a lot of money, is the Stockadian End Zone route. It is in the black zone. The directions are:

However, Stockadians should be aware that the end-destination is in the red zone, meaning more powerful zombies inhabit the area, the most common being tendrils, long arms and rumblers. The only bosses are giant spider, wraiths and black titans . The loot here will be plentiful and will grant skilled looters will plenty of cash for early leveling. Most players stay here until level 40+, however if you don't feel like traveling to Fort Pastor you can repetitively loot the nearby orange zone and look for bosses to kill, or you can loot the red zone also nearby.

Southern Entrance into the Stockade.

Route from Dogg's Stockade to Precinct 13. 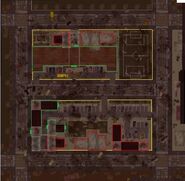 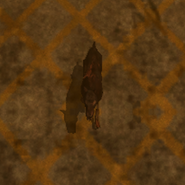