Dusk and X-Dusk items are some of the most powerful and cheapest weapons available in Dead Frontier, however, these two sets of Dusk equipment must be earned and cannot be purchased from other players, on the Marketplace, or from the Credit Shop. Every piece or equipment or gear is non-transferable meaning it cannot be traded.

There are three different Dusk Shops that a player can earn access to, those being the Dusk Shop, X-Dusk Shop, and Clan Dusk Shop. Each can be unlocked in different ways, the details for each one can be found in their specific sections on this page. You will know if you have unlocked a dusk shop if you see a bright red and bold link appear on the bottom of the "Outpost" page.

If you somehow accidentally scrapped or discarded a Dusk or X-Dusk item, you can file a support ticket and if the staff member replying to your ticket is feeling kind they will restore that item. This is normally only done on special occasions, do not do this if you scrapped low-value or if you have already requested this multiple times within a short period.

For detailed information on each Dusk item, you can view them collectively on the Special Gear page.

The regular dusk shop was the first to be added into the game. At first, it only contained the Dusk Kris, Dusk Razor, Dusk Enforcer, Dusk Mesh, and Dusk Helmet. This shop was later updated to include the Dusk Saw, Dusk Carbine, Dusk Striker, Dusk SMG, Dusk MAG, Dusk Launcher, and Dusk Reactive in 2011.

This shop was unlocked by placing first place in Top Player Killer or Top Survivor when the week finished, however, this shop was later replaced in 2015 by the X-Dusk Shop and now only serves as a reward to players that reach level 220. You can view all the Dusk items here.

This shop replaced the regular dusk shop as the demand for a buff to the previous dusk weapons was on the rise, and rather than buffing that set of dusk AdminPwn decided that he would make a new dusk set as it would be much stronger and he didn't want to give it out to a decently large amount of players that had already owned the previous set as the whole point of this gear was to earn it.

The X-Dusk Shop is rewarded to players that place first in Top Player Killer or Top Survivor at the end of the week along with reaching level 325. You can view all the X-Dusk items here.

First teased before the clan system came out to contain unique rewards, the Clan Dusk Shop was introduced as a way to motivate clans to compete against one another. When first implemented this shop contained a selection of regular dusk items, and was later updated to contain X-Dusk items instead.

This shop is unlocked for every member of a Clan HQ if they place first in the weekly Top Survival Clans or Top PvP Clans record lists (also known as CTS and CTPK) and that member has been in the HQ for longer than 5 days that week. If a player is to leave an HQ that has access to the clan dusk shop they will continue to have access to it until the end of that week. It includes the X-Dusk Razor, X-Dusk Enforcer, X-Dusk Helmet, and XXL Security Box which holds up to $500,000 on death. Clans also earn Victory Points if they place top 10 on the weekly record lists, which can be exchanged for clan boosts. 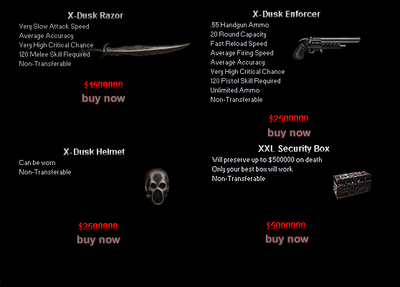 Retrieved from "https://deadfrontier.fandom.com/wiki/Dusk_Shops?oldid=115463"
Community content is available under CC-BY-SA unless otherwise noted.