Despite its rather hefty chance to raise an aggro spike, Explosive can still stand out as one of the more effective room clearers in indoor looting scenarios, thanks to its indirect fire capability, speed and cost effectiveness.

Grinding with Explosives is comparatively harder compared to with other weapons, due to Explosives' unusual mechanics and non existent knockback. To succeed with Explosives, the following methods will be needed:

The first method involves finding a well enclosed area that can keep the majority of zombies outside (such as the walled area at the back of the Gas Station 1D of Bunker), then fire with impunity at the trapped horde. Inevitably, a few zombies will find their way in; defeat them as fast as possible with high DPS weapons such as Rifle-caliber Machine Guns, then continue wall grinding.

This method is ideal for lower leveled players who want to grind with Explosives, but do not want to afford speed drugs and/or do not have enough skill to circle grind. The safety this method provides is in exchange of a huge loss in efficiency, however.

The second method involves finding an open intersection area (or location with very wide, open spaces such as the Soccer Field 1U2L of Bunker), corral the zombie into a large clump by moving in a circular motion around the area, then fire at the center of the area.

As a general rule, the more flat ground there is, the more zombies can spawn. 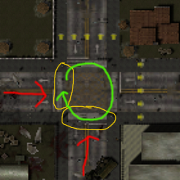 The O-Shape pattern simply moves around in a circular motion around the area, either clockwise or counterclockwise. This pattern is simple and easy to learn and can be used in almost everywhere, but can prove to be dangerous in corner intersection as you are forced to charge directly into a trigger zone and collide directly with a fresh zombie wave every cycle; it is recommended to expend sprint energy to quickly get out of those situations. 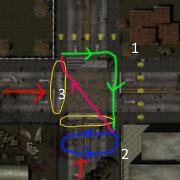 This corner intersection-specific pattern is designed to minimize the threat of trigger zones by carefully positioning yourself in a way to prevent direct collision with the fresh waves. It is more difficult to remember and get used to, but rewards with a much higher degree of safety.

Generally speaking, Explosives are not ideal for fighting bosses because of their low DPS against single target. Explosives can still prove effective against groups of minibosses like Flaming Rumbler and Flaming Long Arm packs, using any of the methods mentioned above.