On the October 6th, 2012 AdminPwn anounced that Dead Frontier-Outbreak 3 is currently under development and will be coming out soon.

On September 7th, 2009 Dead Frontier was updated with a new background image; the burning ruins of a zombie infested Fairview City. The new image became popular within minutes after it was added to the server. Due to its popularity, the long unknown artist responsible for a majority of the recently updated item graphics updates as well as this new background, "Greg Taylor" appeared publicly and released two more wallpaper-sized versions of this city on the next day which can be found at his website: www.gregtaylorart.com.

Greg Taylor and AdminPwn published another background on October 21st 2009, which now presents a dark part of the Inner City, showing various little details such as destroyed shops with interesting signs, a tank, a horde of zombies, fleeing looters, tons of destroyed cars, various plants forcing their way through the street and a lot of burning spots, both within houses and on the street.

These pictures were released in the early days of Dead Frontier (even before the beta release) and were supposed to show which variations of the common zombie will appear in the game. They became quite popular, due to their 3D art and high quality, that parodies popped up on the Dead Frontier forums. 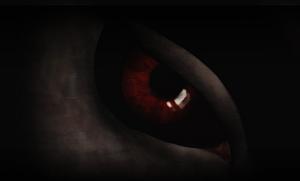 The "Evil Eye" is a well known picture within the Dead Frontier community as it first appeared at the Dead Frontier Trailer / Intro. It was soon used as the background of the flash client, so it can be seen whenever you enter the Inner City or Outpost Attack. It's commonly believed that this is AdminPwns eye, which becomes rather clear near the end of the intro video as he plays the narrator, which new survivors tells about the Outbreak, the past and the current situation within Fairview City. The creator of this picture is unknown.

Fan Art, Videos and other Media

This section contains various fan-made art pictures, videos or other kinds of tributes and content made for and often out of Dead Frontier game content. This category is not open to any content of this sort (as this would be far too much to properly host here). Only certain creations which became very popular and known among the Dead Frontier community are included below. 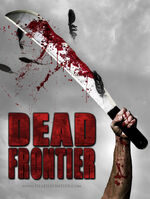 This masterpiece of fanart was made by "Resister" and he promoted it within his first post on the forums. This picture quickly became very popular and is probably still the best Dead Frontier fanart image made from scratch. Afterwards, Resister created several popular ads for Dead Frontier by collaborating with AdminPwn to promote his own art and the game even more.

"Patriarch vs Crow" shows a typical situation which every Survivor faces now and then - trying to kill all pesky Crows around with whatever you can grab before they feed on your eyes.

Created by Beatzoo  Survivor Bogota Colombia .  Avatar Cosplay contains Ripsaw G12, Exterminator Reactive XT and Bio Helmet as a tribute to the game.Soon more cosplay made ​​by reusable materials. You can visit the forum to see step how to elaborate, what materials were used and leave your opinion.

Retrieved from "https://deadfrontier.fandom.com/wiki/Media?oldid=114973"
Community content is available under CC-BY-SA unless otherwise noted.