Until the 28th, all players will receive a +50% EXP bonus. In addition to this you can now hunt two new types of infected, which will only be spawning over the next 5 days. They'll also be dropping some unique, Christmas themed loot.

"Deck the Halls with GORE this Christmas!

Introducing, Christmas Chaos! The ultimate Christmas event that will start on Monday 24th December and continue through until Friday '28th December. During that time all players will:

​Don't miss out on one of the most exciting events in Dead Frontier history!"

The Corpse Destroyer has been added to the Credit Shop...

"To celebrate Christmas 2012 we've just released a new Limited Edition heavy machine gun. The Corpse Destroyer is the 2nd most powerful HMG in the game (next to the GAU-19), and will only be available until December 31st so get it while you still can!" 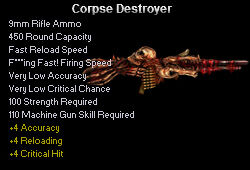 “I've just finished uploading another update to the Dead Frontier inner city client, this version includes:
New anti-cheating mechanisms for both TPvP and TS
Improved frame rates for lower end PCs
Further aggro and difficulty tweaks
Zombies getting stuck in the air bug fixed
Zombies teleporting through interior walls fixed (might still be an issue for slower PCs however)
Vomit through walls bug fixed (finally!)
For the next few days I'm going to be working on adding another 20 Fort Pastor missions. Once that's complete my aim is then to move on to the multi-player overhaul I mentioned a while ago.
ETA for new gear is early January 2013.“
— AdminPwn

“Our Halloween Madness event has just begun!
Until the end of the week, all players will receive a +50% EXP bonus. In addition to this you can now hunt two new types of infected boss, which will only be spawning over the next 5 days. They'll also be dropping some unique, Halloween themed loot. So dust off your M60, put your forum trolling on standby and get your backside into the Inner City asap!
Happy Halloween everyone :-)“
— AdminPwn

The map has been extended and new types of infected have infested Fairview. The Map on the wiki as well as the Bestiary will be updated as soon as any capable survivors manage to obtain enough data.

“Introducing Halloween Madness!
We're going to be running a Halloween event that will start on Wednesday 31st October and continue through until Sunday 4th November. During that time all players will be able to hunt a new, rare class of infected that will only appear through Halloween. What's more, they'll be dropping some very special Halloween themed loot. Oh, and we'll be chucking in an extra +50% EXP for the entire 5 days as well! Don't miss it! :-)“
— AdminPwn

The Corpse Ripper has been added to the Credit Shop...

"To celebrate Halloween 2012 we've just released a new Limited Edition sub machine gun. The Corpse Ripper is the most powerful SMG in the game, and will only be available until November 5th so get it while you still can!" 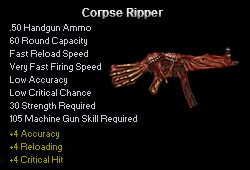 As stated on the Development Blog:

“I'm just writing to let you all know that I'm still alive, and that Dead Frontier will be a getting another large update in the next month or so. Here is what I'm working on right now:

The Corpse Piercer has been added to the Credit Shop...

“We've just released a new Limited Edition firearm. The Corpse Piercer is the most powerful rifle in the game, and will only be available until September 10th so get it while you still can!“
— AdminPwn 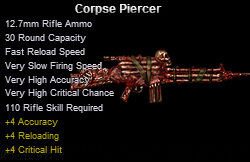 The game experienced a lond period of downtime. As compensation, all boosts purchased during the last 30 hours will be refunded and an additional double EXP event is on. Full update:

“As some of you may be aware, we recently had a large period of downtime (just over 11 hours). Sad I know you are all very frustrated about this and I totally understand. Please accept my sincerest apologies.
Essentially we rent our servers inside a large, fully staffed datacenter. Unfortunately a router at this datacenter broke down, and this caused all of the machines we had there to lose their outside internet connectivity. All we could do is wait while the staff at the datacenter tried to fix the problem. Unfortunately it took them 11 hours to fix it in the end.
We did consider the option of restoring from our latest offsite backup and spinning up a server in another datacenter. Unfortunately this backup was just over an hour out of date. Essentially if we restored this backup, anything players did in the last couple of hours would be erased. That means all loot, exp etc would be lost. We came to the conclusion that it was better to simply have a longer period of downtime, but with no player losses, than to have a shorter one with the rollback. To be honest, I think we made the right choice.
I have just refunded any credits spent on speed boosts, damage boosts or exp boosts in the last 30 hours in order to ensure that nobody is too badly out of pocket over this downtime.
In addition the next 24 hours will be a double exp period, in order to help make up for this loss.
Once again I'm very sorry this happened and I hope it didn't ruin your plans too badly.“
— AdminPwn

“Double EXP this Wednesday, July 4th!
To celebrate US Independence Day we'll be holding a double EXP event this Wednesday. Players will receive 2x EXP in all forms (from Missions, OAs and normal kills) on July 4th, between 6am EST and 10pm EST. So, if you've got a character that needs some levelling up, this would be the perfect time to do it!“
— AdminPwn

The Corpse Crusher as been added to the Credit Shop...

"The Corpse Crusher deals the most damage of any silent melee weapon in the game and will only be available until July 25th 2012 so get one while you still can!"

This piece was painstaking directed and animated by Robert Dowling over the course of 7 months. It also features an original soundtrack from Sean Beeson.

Full interior and barricading have been released:

“Title says it all really. Everyone can now access interiors and barricading, plus we now have a total of 31 different building types to explore. :-)

Plus, what's extra cool about this is that I wasn't late. I said 10 days, and it was exactly 10 days. Solid proof that I don't *always* operate on valve time! Rejoice!“
— AdminPwn

A GM-only version of interiors has been released.

“I've just released a GM only demo of the barricading system as promised. There will probably be a fair few bugs and glitches with this system, so please be patient. I should have everything fixed up within 1-2 days. The final interior & barricading release for all players will be in approximately 10 days. “
— AdminPwn

The Dead Frontier Wiki is proud to host a community driven project aiming to create a map of Fairview. The Detailed Mini Map allows anyone to upload map fragments in a combined effort to establish a detailed overview of the Inner City. In the tutorial you can find all the required information on how to create proper images. Everyone is welcome to contribute!

Plans for releasing interiors have been disclosed:

My plan was to release a handful of basic interiors sometime tomorrow, which I could still do. However, these interiors really are very simple (only one floor, very sparse design-wise etc) and there are still a fair few bugs I need to work out. Honestly I think you guys would be very disappointed if you saw these. Therefore, I've decided to delay things another week so that I can least get most of the bugs figured out, get the multiple floor system finalized and make them look a bit more interesting.

Here is my release plan:

1. Some interiors towards the end of next week. I'm aiming to have about 5 different building designs complete. This will be a GM only release.

2. Approximately 1 week later, I will release the barricading and personal outpost system for GMs.

3. Another 1-2 weeks later, I will release the full interior and barricading system for everyone. We should have about 35 building designs, each with a lot of random variations. And of course, all bugs should be completely ironed out by then, based on GM feedback.

The Corpse Erruptor has been added to the Credit Shop.

"The Corpse Erruptor deals the most damage of any grenade launcher in the game and will only be available until April 30th 2012 so get one while you still can!" 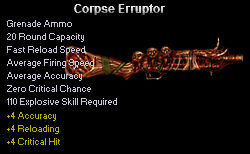 Today, DF has been upgraded to Unity 3D version 3.5. It is unknown of the total effect of the update, but most noticeably, the IC page has been redesigned.also full screen now works properly to go full screen press the F4 key.

The Corpse Shooter as been added to the Credit Shop.. 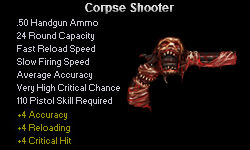