Rudolph and his reindeer allies have been infected with the N4 virus! Despite Cpt. Claus's best efforts to quarantine the animals, they finally managed to escape this morning. Santa expects them to reach Fairview within days and is now en-route with his crack team of elf commandos. But the mutations are extreme and Cpt. Claus is going to need your help if his mission is to succeed!

The Rage of Rudolph event stats on the Wednesday 24th of December and continues until the early hours of Monday December 29th. During that time you'll be able to join forces with Santa and his elves, take out the infected reindeer and find some rare Christmas loot. In addition, all players will receive double EXP for the entire 5 days.

When the update was released over a month ago, Admin has stated that missions were currently being worked on. Today, these missions has been released for those staying in the Bunker to take on.

Take a gender with the first known Bunker Mission: Firearm Shortage. Given to you by an unnamed Scientist, the Bunker's defense forces are low on weaponry and it's up to you to retrieve a shipment of guns from a nearby military camp.

This Christmas I'll be releasing a new limited edition item; the Mystery Box into the Credit Shop, and it will cost 1,200 credits (1,000 for GMs)

Since this box is a little different to other items I normally release, I'm going to give it a proper explanation. I've tried to make sure that this Mystery Box is both fun, whilst also providing real value for money. I want to make sure all you guys understand exactly what you are buying before you part with your hard-earned credits.

Essentially when you open it, you have a random chance to get either:

Below is a full list of items, and the exact chance you have of finding one inside. In addition I've listed what I consider to be the correct market value of the item at the time of posting. You can see that based on the value of the item, and the chance of finding it, that on average you will receive an item worth 1,611 credits. This means you're effectively getting a 38% discount if you are GM.

I hope that this all makes sense, and that you agree this works out to be good value for money. Enjoy!

"Unfortunately Dead Frontier has been affected by a large, distributed denial of service attack for the past 2-3 days straight. Some of you may have noticed the downtime that this has caused the game. This attack is approximately 100 times bigger than any we have dealt with in the past and is therefore proving a big challenge to us.

Niosop and I have been working hard on a solution. We had hoped to have completely eradicated the threat by now, but it's proving a lot more difficult than we first thought. Although we believe the worst is behind us, there may still be some minor hiccups over the weekend. The less essential parts of the site such as chat & multiplayer mode may experience some longer periods of downtime as we focus on protecting the core gameplay.

I am aware some of you may have lost significant time on your drug purchases. Unfortunately due to the complex and sporadic nature of the downtime it would be very hard to verify who had, and who had not genuinely lost out. Therefore I will be upgrading this weekend's event to an ultra boost. I hope this will go some way to making up for whatever losses you have encountered.

Sorry for the fail ladies and gents,"

The new updates have been released, including the new infected such as Flesh Hounds, Irradiated long arms and Mutant Rumblers, an all new set of high tier weaponry, the Secronom Bunker, a new outpost in the North East Zone, and new areas such as Gas Stations and Bunkers to explore and plunder!

Stay tuned players for more updates that will be coming soon.

Starting early on Friday 31st October and continuing through until the early hours of Tuesday November 4th, all players will be able to hunt multiple rare classes of infected that will only appear through Halloween. What's more, they'll be dropping some brand new, never seen before Halloween themed loot. And of course we're also throwing in a thumping +50% EXP bonus for the entire 4 days as well.

UPDATE #2: (18/09/2014): I'm sorry to say that the updates are still not ready. As my wife reached the last month of pregnancy she had some complications and was put on bed rest, leaving me to look after our two other boys most of the time. Unfortunately this did slow my pace somewhat. I'm pleased to say the baby has now arrived, but as I'm sure you can all imagine, it will be another couple of weeks before I can fully devote myself to getting these updates finished. I think we are now looking at a completion time sometime in October.

However, I'm confident that the update will turn out to be worth the wait. As I've gone along I've continued to expand my plans and it's shaping up to be an exciting addition to the DF universe.

One thing I'd like to note is that I am now planning to release all the updates in a single large batch rather than in a piecemeal fashion. I came to the conclusion that everything will work together far better as a unified expansion of the game world.

Thanks to you all for being so patient

UPDATE: (25/08/2014): As I'm sure you've all noticed I am currently behind schedule with the updates. Right now I'm still working on the Inner City changes but unfortunately I don't expect to have these finished until early or even mid September now.

However, one thing I'd like to bring up is that my wife is currently pregnant with my 3rd son and he is due in mid September. If he decides to come early there is quite a high possibility this will delay things further. I'll still be putting in a couple hours a day once he arrives, but much more than this will be difficult. Therefore many of the planned updates might not be finished until October.

After being primarily occupied with Doom Warrior for the past couple of years I'm finally returning to work on Dead Frontier full-time. I think we can all agree that the game is in need of some TLC. Here is what I have planned for release in the next 6 weeks or so.

Clan System - ETA Late July 2014 (for GMs) This has been one of the most requested features in Dead Frontier's history, and I can only apologize that I didn't implement it sooner. I have been working on it solidly for the past couple of weeks and plan to have it finished before the end of the month (July 2014). If you've seen how clans work in Doom Warrior then you'll have some idea of the way in which DF's clan system will work. Essentially Clans will have their own weekly competitions for surviving and gaining PvP points. The winning clan(s) will have access a unique set of rewards.

Please Note: Gold Members will have access to clans 2 weeks before other players. Extended Inner City & New Enemies - ETA Mid August 2014 The Inner City map will be extended with a ton of new areas to explore. These areas will be populated by several new types of enemy and bosses. These more difficult areas will of course have improved looting chances compared to the older parts of he city.

New Equipment - ETA Late August 2014 Dozens of new weapons and pieces of armour will be added to the game, a large proportion of which will be lootable in the newer Inner City areas.

New Outpost & Missions - ETA Late August 2014 Since traveling so far away from outposts can be a tedious task, a brand new outpost will be created in close proximity to these new areas. The new outpost will also have it's own unique set of missions with improved rewards. I'd like to take this moment to apologize to everyone who has been waiting for updates to DF for so long. I plan to make up for it and then some over the next year.

Please Note: The above ETAs are just estimates for when I plan to have each feature complete by. Judging the length of project is a skill which I am far from mastering, so delays are quite possible. I will however endeavour to do my very best to keep to these timescales. 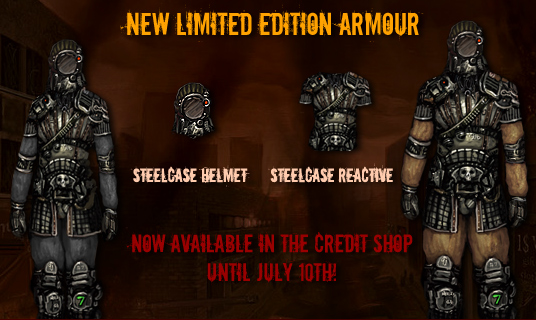 We've just released a new set of Limited Edition Armour. The Steelcase Reactive is the toughest armour in the game, but it will only be available until July 10th 2014 so get it while you still can!

This weekend all loot spots will have a 3x greater chance than normal of generating piece of armour or a weapon. This includes both interior, exterior and boss loot spots and applies to both GMs and Non-GMs. The event starts at around 6am EST on Saturday the 1st and continues through until the early hours of Monday the 3rd.
Enjoy!

This weekend Fairview will be overrun with flaming zombies that, for some inexplicable reason will drop nice big bundles of cash! The event starts at around 6am EST on Saturday the 22nd and continues through until the early hours of Monday the 24th.

This weekend all players will receive the benefits of having taken a Mega Boost. That means a constant +35% bonus to movement speed, +35% to damage dealt, and +50% to all exp gained.

The event starts at around 6am EST on Saturday the 8th and continues through until the early hours of Monday the 10th.

Please Note: This effect will not stack with regular boosts!

This weekend all players will receive the benefits of having taken a Speed Boost. That means a constant +35% bonus to movement speed. The event starts at around 6am EST on Saturday the 1st and continues through until the early hours of Monday the 3rd.

Please Note: This effect will not stack with regular a Speed Boost!

This weekend any cash found will be in amounts 3x greater than normal. This bonus applies to both GMs and Non-GMs. The event starts at around 6am EST on Saturday the 18th and continues through until the early hours of Monday the 20th. Enjoy! 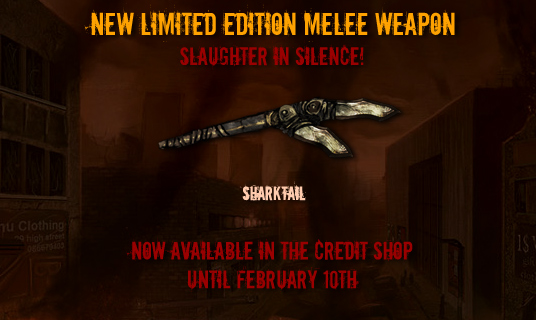 This weekend all loot spots will have a 3x greater chance than normal of generating a piece of armour or a weapon. This includes both interior, exterior and boss loot spots and applies to both GMs and Non-GMs. The event starts at around 6am EST on Saturday the 11th and continues through until the early hours of Monday the 13th.