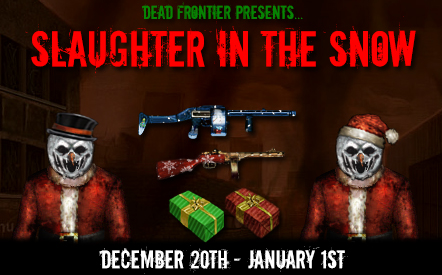 SLAUGHTER IN THE SNOW HAS BEGUN!

Until January 4th you will be able to:

From today onward, the Clan Page system will be officially retired, ending any further support of the Wiki towards any additional clan activities:

A quick notification to remind you guys that the deadline for the Clan Page removal has been extended. Due to the fact that most of the community primarily uses the forum (instead of the Wiki or Discord server) for official information, quite a few clans such as the Incarnate Family were not informed about the warning and thus continued to use their clan pages normally.

Because of this, in addition to announcing on the forum, we have decided to extend the deadline to Thursday, December 12th, 2019.

SLAUGHTER IN THE SNOW

Under the freezing conditions of the North Pole, the N4 infection has mutated, turning once inanimate snow sculptures into brutal killing machines! Hordes of infected Snowmen, Elves and Reindeer are now heading towards Fairview to feast on the flesh of the embattled survivors. Luckily Cpt. Claus and his honour guard of Elf commandos still live, and are preparing to join the battle! Will you survive the onslaught?

Starting early on Friday 20th December and continuing until January 1st you will be able to:

- Grab one of two new Limited Edition items from the credit shop :)

With new and free platforms to host your clan page on, including the integrated game forum, it doesn't make much sense to have clans hosted on the wiki. This section hasn't been used much since 2013-2014, but we're giving you notice that the clan section and all clan pages will be removed from the wiki one week from now on December 8th, 2019.

If there is a clan page you own or you're fond of you should use this opportunity to preserve the page using your Fandom user subpage or blog.

Starting early on Tuesday 29th October and continuing through until the early hours of Monday, November 4th players will:

- Have the chance to craft a brand

- Rumour also has it that a very old and rare piece of equipment will also be making a brief return to the game...

- Stairs have been removed from Arenas to reduce lag/sync issues surrounding their use.

I am very proud to announce that I am working on a standalone Dead Frontier game. You can read about it in the latest Creaky Corpse blog post here: https://blog.creakycorpse.com/2019/10/dead-frontier-still-alive.html

I'd love to hear your ideas and feedback during the development process. If you're interested please visit the new category for it titled DF: Still Alive in the official Dead Frontier Discord server! https://discord.gg/deadfrontier2

Hello everyone, Alexander Pwn here. We have unfortunately neglected to keep the Wiki updated and I must apologize for this. I cannot promise persistent consistency but I will do my best to continue working here and finding others who will help as well.

There have been major updates to the game. December 6th was the release of the new crafting system in Dead Frontier. Since then a large array of weaponry has been added such as: 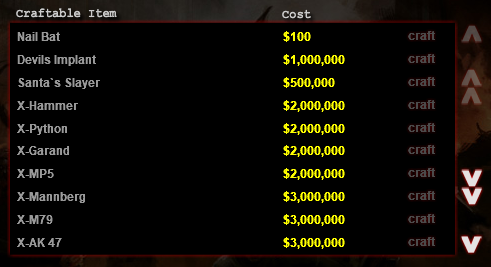 These have drastically changed gameplay as they are comparable to the X-Dusk items yet obtainable via looting. Good luck, looters!

After the initial introduction of the new EAS system, which works as a 2 factor, players released there were some issues with it when it came to users on VPNs. Since their IP would change so often, it required them to use the 2 factor code much more often than regular users. On top of this, players that leveled up around the same time the game requested the 2 factor code it would soft lock the account.

All of these issues have been addressed and fixed, you can read the thread here.

Today AdminPwn added a way to add additional security to your account. This system uses your email and recent IPs and acts a 2 factor authentication system. This system is disabled by default, but you can activate it by clicking the link above your player profile. Once this is activated, you cannot turn it off.

Read more about it here. 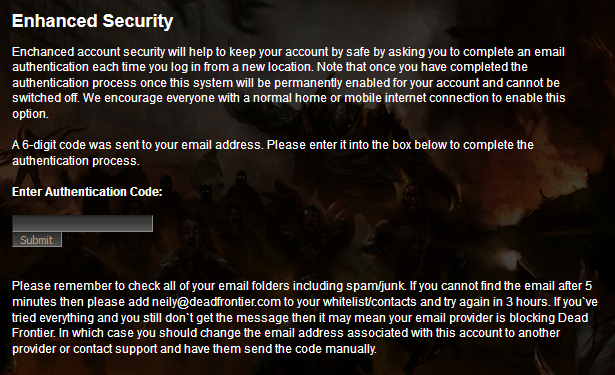 Today AdminPwn introduced another mini update that brought small quality of life improvements to the game. Commas are now added numbers all over the outpost and personal outpost screens. Boxes of ammunition over under the size of 2,500 rounds can now be traded, this was raised from 1,500 rounds. Lastly, a new huge security box was added to the credit shop the saves 50 million dollars on death.

You can read more about it here.

Retrieved from "https://deadfrontier.fandom.com/wiki/News_Archives/2019?oldid=115042"
Community content is available under CC-BY-SA unless otherwise noted.