WAIL OF THE WENDIGO HAS BEGUN

From now until Sunday January 3rd you will be able to: 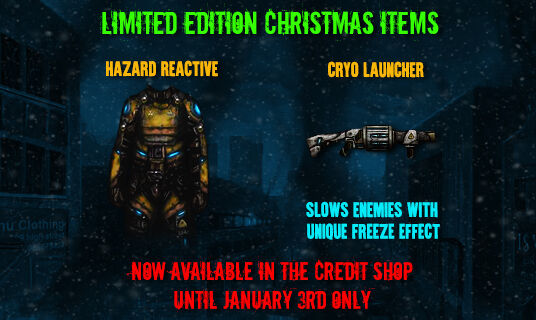 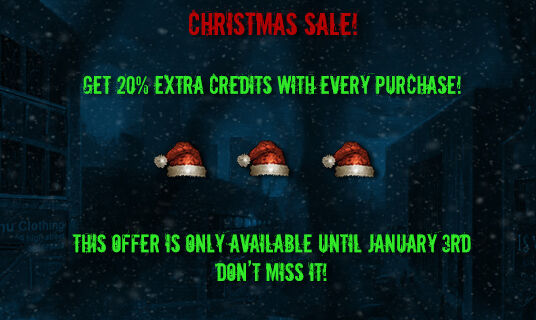 DF1: WAIL OF THE WENDIGO

Starting early on Friday December 18th and continuing until Sunday January 3th you will be able to: 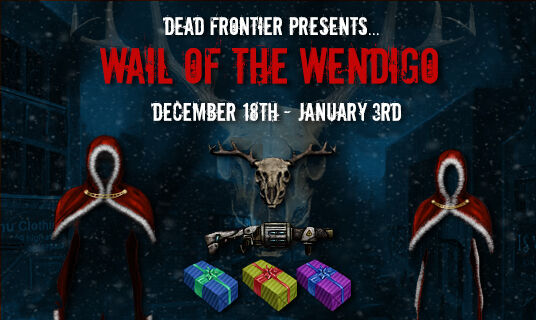 I'm happy to report that Sloth (aka hotrods) has practically finished the conversion of the Dead Frontier site from Flash to HTML. We are now ready to begin receiving player feedback and bug reports on these so that we can have the game fully operational in time for flash being removed from major browsers later this month. You can test the HTML version of any page by simply clicking the link at the top. If you notice any problems please either post on the forum topic here:

Or in the Discord channel #df1-html-bug-report. When reporting a bug, please be sure to tell us which browser you are using.

NOTE: While we would eventually like to have all pages operational on mobile & tablets, our current focus is on getting things working with modern Desktop browsers only. So for the time being please only submit reports of issues that occur on a PC or Laptop.

Thanks for your help everyone!

Starting early on Tuesday October 27th and continuing until Sunday November 8th you will be able to: 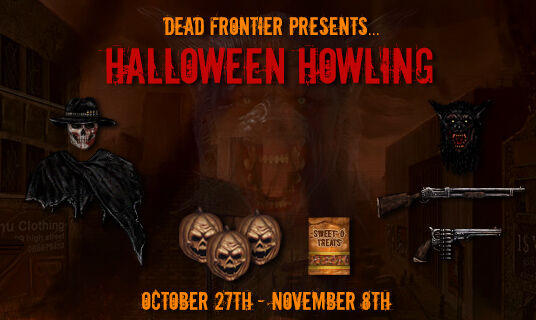 Due to the nature of Bandits being a new event type they will not spawn until today's reset!

Bandits are a new PvE enemy type that utilizes weapon and player stats the same way you would. Their weapon damage output scales depending on what weapon they have been equipped with and their critical hit, accuracy, or reloading stats.

That means if a bandit has 80 points invested into the critical hit stat, and they are wielding a 'Very High' critical chance weapon like an Ironsight 33-F, they would have an 80% chance for their shot to be a critical hit.

Bandits display their accuracy and the area they are a threat to through transparent cones and circles (explosives). Threat indicators are colored yellow when a bandit is alerted, and colored red when they are engaging/shooting their target. These indicators disappear if the bandit has no target or is reloading.

The speed in which bandits can track their target with their weapons varies based on the bandit's tier and what weapon type they are using. An Elite Bandit has a multiplier that increases all tracking speeds slightly. Bandits using high precision weapons track their target faster than ones using a crowd control weapon.

A bandit’s movement is on a random interval, so they will only reposition or move periodically. Their movement is limited to a range based on their initial spawn position. They will not move beyond that range regardless of target or state. A bandit's movement behavior is also determined by the type of weapon they have equipped.

Bandits will initially be featured as a boss group type. Shooting them grants experience based on the damage you deal, and killing them will create a lootable body. Loot pools are similar to existing infected-based bosses (weapons and armour) and change based on which zone you kill them in, this is with the exception that they have a rare chance of dropping Experimental Parts used to craft Dawn weapons.

Bandit boss groups spawn every hour and do not override other boss spawns. You must be present within the first 10 minutes of their spawn to be eligible for loot. If you fail to kill and loot them within the allotted 30 minute event time frame afterward the loot will despawn or return nothing similar to DF2’s challenge system.

We'll be looking at integrating bandits into more existing content like missions and events in the future.

Dawn Weapons are craftable upgraded versions of X-Dusk weapons. Crafting them requires that you own the X-Dusk Weapon you want to upgrade, Experimental Parts, and a Dawn Blueprint for that weapon.

Both of the materials can be looted by Gold Members and non-Gold Members.

This update contains some uncharted territory for us, so I'll be watching for feedback. I'm sure some difficulty tweaks and AI improvements to prevent some of the cheesier tactics in regards to bandits will be required. Thanks for the support and patience.

We've added 10 new implants to the Credit Shop. These are intended to allow newer players the chance to catch up to older players who were able to get the older run of LE implants.

Note: These new implants cannot be equipped together with the older LE implants 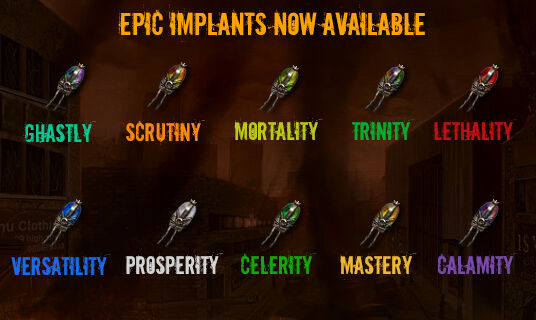 The amount of Implant slots you get as you level up has been changed so that your character now improves more often.

Note: Your implant slots will not update until you either gain another level or use a Stat Reset

The new implant slot thresholds are:

You can now fast travel between outposts by paying a fee of approximately $5000 per map square travelled. This option can be accessed by clicking on the Fast Travel button on the outpost screen.

From now until August 9th you get:

AND +20% Extra Credits with all purchases!

Check out the new Limited Edition Barnell RF31 Crossbow. It's the only completely silent ranged weapon in DF, and comes with unlimited ammo!

Only available until August 9th so grab one while you can! 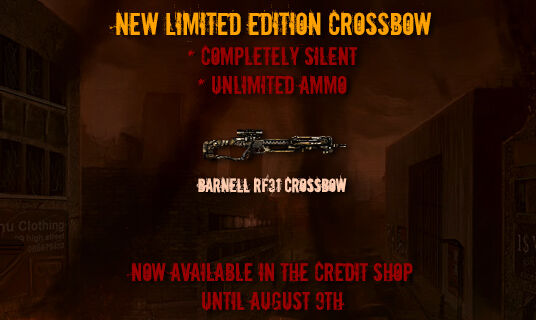 Rather than delaying this update further, I've made the tough decision to take the previously teased Bandits for this update and roll them over to the next update so they can be properly balanced and fleshed out. Everything else is present. Thanks for understanding.

HUGE thanks to Admin and Barney for helping with this update! - Clayton

I'm aware that it's been some time since the last DF1 update, I'm working on getting it out ASAP. In the meantime... here are some snippets of what's to come. All the details on everything that was added or changed will be released when the update is finished.

We have received confirmation that all outpost leaders, likely in an attempt to reduce survivor casualty and to scout out for the unidentified threat mentioned by Precinct 13, have agreed to send soldier squads to blocks with possible presence of boss zombies. When you enter a boss block, you might have a good chance of encountering one of these squads, so watch out! 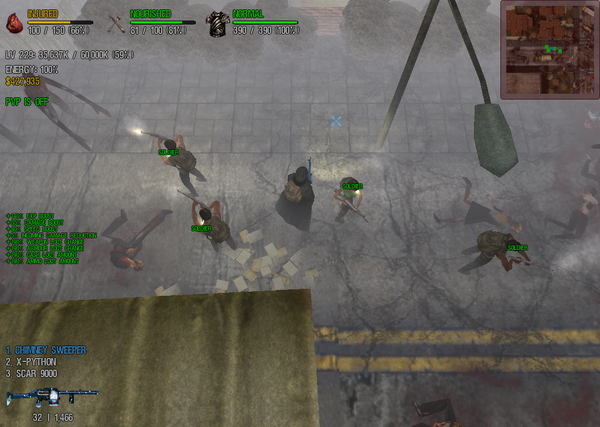 After 2 months of reworking, we are happy to announce that the Character Build Guide is now once again open.

The commander of Fort Pastor has seen fit to send some of his men to aid the Precinct's polices in intercepting a new, mysterious threat originating from the Wasteland. For now, the threat remains unidentified and none has managed to encounter it directly; maximum caution is advised. 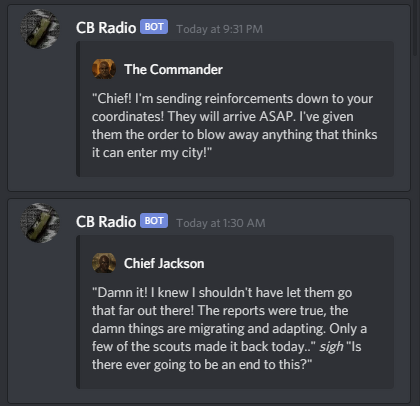 Several weird transmissions appeared on the CB today, apparently made by Chief Jackson from Precinct 13 himself. Is this a sign of things to come? 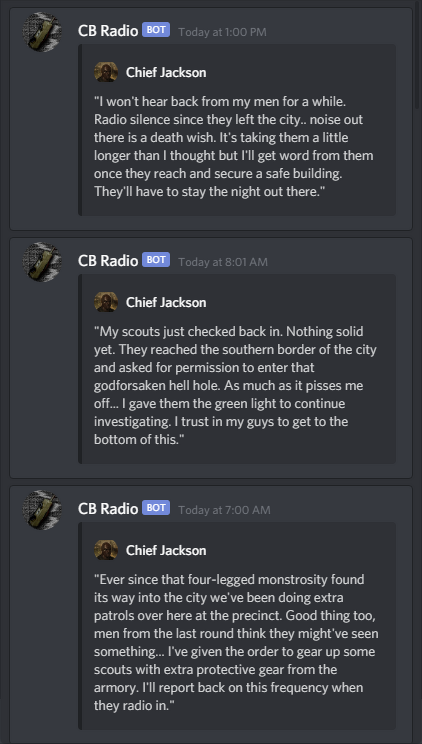 From today onwards, missions, OAs and boss cycles will run constantly throughout the entire day with only 10 minutes of "void time" between 7:55am and 8:05am AM UTC.

To celebrate 12 years of zombie killing mayhem, everyone will get +300% EXP for the next 24 hours!

EASTER OF EVIL HAS BEGUN!

Until April 18th you will be able to:

Dr. Adler's team have noticed a terrifying new strain beginning to appear amongst the ranks of the N4 infected. Developing elongated ears, thick layers of furr, and gigantic front teeth these mutations appear to be one of the most deadly we've seen so far. We'll need every one of you survivors to help fight back against this new menace that is quickly spreading over Fairview!

Starting early on Wednesday 8th April and continuing until April 18th you will be able to:

Grenade DPS numbers will be updated due to the recent V41 release allowing proper confirmation of grenade damage mechanics (which is of course different from the current explanation). The mechanic goes as followings:

A brief update on the situation regarding the recent changes in weapon DPS shown on the wiki, plus some other things: