The street was deathly quiet, a low moan drifted in the midnight air as I slowly paced down the road. In the distance, the sound of machine gun fire crackled in short bursts, followed by the sounds of dying men and infected. Suddenly, I was thrown to the ground with a crash. I looked up to see a woman, her face cut up and her mouth shredded, her partially bare red, yellow teeth exposed from her broken jaw, torn to a ruin. She screeched and tried to bite my shoulder, but I tucked my legs up under her stomach and kicked her off me. She fell to the ground with a thud, but was back on her feet in a flash. She was again nearly upon me when her head exploded, splattering the car behind her with blood. She fell to the ground limp, and standing in front of me was a Police Officer. "Quickly, follow me before more of them come" he said, a 12 gauge in his hands. I nodded and got to my feet, before following my rescuer back to where he came from; Precinct 13. As I walked in through the gates I saw more survivors, huddled around small fires with groups of more Police Officers. I smiled as I finally realized I was safe from the terrors of Fairview. For now.

Precinct 13, also referred to as P-13, is one of the five outposts in Fairview. It is the third furthest outpost from Nastya's and is located in the far southern area of the map. It contains the exact same functions as Nastya's Holdout, including the ability to respawn there after death, once it has been visited.

It is likely that this outpost is an homage to the movie Assault on Precinct-13 - such homages seem to be a recurring theme among the outposts.

Precinct 13 is the only functional police department in Fairview. There are very few inmates however, as many "minor" crimes are overlooked in these harsh times, and the penalties for more offensive crimes may be punished by firing squad or banishment from the community. Other departments have fallen to the infected and the only trace of their existence are the abandoned police cars, infected policemen that roam the city streets, and the zombie-infested remains of the buildings.

When you first reach Precinct 13, it is recommended to go exploring to the left first, since the outpost itself and anything to the right of it is in the orange zone, and most players aren't prepared for the more dangerous zombies yet. However, the more experienced players tend to also go here to find Titans, so if there are groups of survivors running around with machine guns, get out of there. More dangerous zombies - tendrils, spiders, leapers, bloats, brutes, Titans and Mothers - are known to spawn here quite often. Reapers, bones, sirens, small brutes and other weaker zombies are seen occasionally, usually during outpost attacks and to the left.

With the discovery of the Wastelands to the south, Precinct 13 is also now home to groups of unusually well armed level 75+ players seeking thrill, EXP or special loots like Volatile Hides.

A police officer at the gate may have been in Nastya's Holdout before, since he says he hopes that his family made it back there.

To get to here from Nastya's Holdout , you have to follow a South-East zigzagging pattern.

Precinct-13 is quite difficult since it is located in the orange zone. Tendrils and Spiders are common here, along with plenty of Reapers, Bones and Brutes. It is considerably easier than Fort Pastor but still challenging for weaker players.

Surviving at Precinct 13 for a level 75+ pose a much different set of challenges: Wastelands looting is simply terrible at providing basic supplies like ammunition or medicine, and Precinct 13 is too far away from the normal End Zones for looting to be practical. In addition, most players will simply not have enough firepower to face the Wastelands' threats. As a result, prices for pretty much anything tends to be higher than in Secronom Bunker.

P13 missions are usually easier than Fort Pastor missions. For example, you have to kill a wraith with the help of Chief Jackson, but at Fort Pastor, you're on your own.

However unlike Fort Pastor missions, Precinct 13 missions have aggro in most of the mission areas.

Precinct 13 has frequent outpost attacks but it is quite hard as brutes (large vomiting zombies) and bloats as well as spiders and tendrils are common. Bones, reapers and small bloats are also present. However you can stay inside the outpost and shoot the zombies with the guards helping, but a big crowd of zombies can get through or several powerful ones.

Precinct 13 loot is medium-tier but great for progression, being in the orange zone it is even possible to loot 12.7mm Rifle bullets just a few blocks to the right. Going left, however, puts you back in the yellow zone meaning the loot will be the same quality as around Dogg's Stockade. If you feel that you are too weak to go to the right of P-13, just go into the warehouse below the outpost, on the same block itself. Players have found level 21-30 and, less commonly, 31-40 food and medication. There is also a small chance to find the Flak Jacket in the buildings around the outpost block, which scraps for $11000.

P13 has a direct route to the South-East End Zone; just head right all the way. The best loot path is to go to the end of the old black zone, then up two, where there is a hospital. However survivors at P-13 should be aware that the end-destination is a black-danger zone, meaning extremely powerful zombies inhabit the area; tendrils, long arms and rumblers are the most common zombies in the black zone. The bosses are massively powerful zombies which are capable of taking down an army of inexperienced survivors: flaming giant spider, flaming wraith and black titan. Normal Wraiths and Giant Spiders are also seen on some occasions. For more information see looting, Black Zone and Bestiary.

Route to Precinct 13 from Nastya's Holdout.

Route to Precint 13 from Dogg's Stockade. 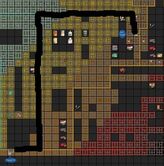 Route from Fort Pastor to Precinct 13.
Community content is available under CC-BY-SA unless otherwise noted.
Advertisement