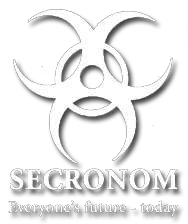 Secronom Incorporated was one of the leading pharmaceutical companies in the old world, with their main product being the Nerotonin medical virus series and the extremely effective Nerotonin-2 drug. They were a major international company, but they mostly specialized in pharmaceutical aspects.

Secronom's genetic engineers were also those who created the Nerotonin-3 virus strain, which by itself was a simple medical prototype virus aimed at neutralizing cancer. Although, due to its experimental status, it was still highly unstable and it easily reacted with another unknown genetic strain and formed the highly hazardous Nerotonin-4 virus.

The majority of Secronom scientists warned the world about the hazards of the N4 virus, unfortunately most countries either didn't heed their warnings or it was too late for them already. The United States of America was a perfect example of a country, which quickly fell, due to them being arrogant about the N4 virus. After the so-called "Apocalypse" or "End of the World", and the devastation that followed the first weeks of the outbreak eradicated most of human civilization on Earth, only very few of Secronom's scientists remained hidden from the public and even less decided to reveal themselves.

The few publicly known genetic engineers, who have survived both the Outbreak and the revealing of their past occupation are among the best of engineers living in Nastya's Holdout, with some of them directly planning with reputable survivors to raid the local Secronom facilities to recover and possibly use whatever they may be able to salvage from the ruins to create a cure.

There aren't a lot of Secronom scientists left today and their numbers are decreasing as each day passes. Only a few of them have authorization to access Secronom's top-secret files. Without those access codes the files that contain information about the N4 virus and its genetic coding will be locked away forever and our chances for a cure will be diminished. The more raids we do, the more successful our chances are of retrieving those files. We still have hope.

Today, Secronom has largely been obliterated, their warehouses overrun and labs destroyed. Three by-products remain of the once powerful corporation's legacy.

Secronom Keycards can be found in the Inner-city, their purpose is unclear as there are no existing Secronom buildings in the ruins of Fairview.

The modified N-2 virus, the parent of N-4, has been put on the market as an advanced medication.

Later, a cache of N-8B, a more powerful version of the N-2 serum, was discovered in a medical building that belonged to Secronom. There is even a Secronom Bunker located in Fairview and is now used as a sanctuary for survivors and doctors who are still working on a cure for the N4 Virus.

One of the occupations available from the start is the Scientist. It is unknown why such a large amount of people with advanced biological knowledge would be in the same city, unless Secronom had hired them to work in Fairview.

Retrieved from "https://deadfrontier.fandom.com/wiki/Secronom?oldid=110839"
Community content is available under CC-BY-SA unless otherwise noted.